Kenyan mobile phone borrowers are getting poorer leading them to financial exclusion, according to a recent survey on the market trends.This debunks the long time narrative that mobile loans in the country has led to financial inclusion.

Over-borrowing and lack of loan ethics has led more than 500,000 Kenyans blacklisted by credit reference bureaus, compared to 150,000 three years ago.

There are over 50 mobile loan lenders in the country, with Safaricom’s M-Shwari taking a big chunk of the pie. Cases of Kenyans borrowing to try their luck on online betting games have exacerbated the situation.

Consultative Group to Assist the Poor, a consortium of donors affiliated to the World Bank, found out that 47 per cent of Kenyan borrowers made late payments, and 12 per cent defaulted. By analysing digital loans data and making thousands of phone calls across the country, CGAP found out that less than 40 per cent borrowed money for business needs, while some admitted to gambling.

Kenyans who borrow late at night are likely to default, added the survey. 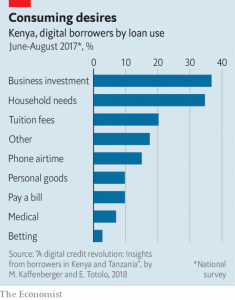 This mirrors the recent Market Overview of Mobile Loans in Kenya report by Credit Info which showed that an average Kenyan borrower has more than 7 mobile loans, underlying the aggressive borrowing culture that has captured the nation.

It shows that 16 per cent of Kenyans borrowed from multiple mobile loan lenders between the third quarter of 2017 and first quarter of 2018.

Overall, 74.5 per cent of the borrowers had between 2-6 mobile loans at any given time.

“Repetitive borrowing/ lending of mobile loans was common in Kenya and on average each borrower had around four mobile loans,” said the report.

RBZ dismisses possibility of a recession

ZECO’s projects fail to ignite due to inflationary pressures

“The American Revolution was born of a tax revolt”Cabinet on Tuesday considered and approved that starting March 2020, a monthly contribution of 2.5% of...

Financial aid to Mozambique only if there is more clarification, IMF...

Any cookies that may not be particularly necessary for the website to function and is used specifically to collect user personal data via analytics, ads, other embedded contents are termed as non-necessary cookies. It is mandatory to procure user consent prior to running these cookies on your website.