Kenya has the highest rate of web traffic generated from mobile devices as of January 2018 according to data from market research portal statista. Ranking first with 83 per cent, Kenya was ahead of Nigeria (81 per cent), India (79 per cent), China (61 per cent), and Poland (59 per cent). Kenya’s rate of webpage views is higher than the global average of 52.2 per cent.

The high ranking for Kenya could be attributed to the high level of mobile phone penetration which is at 88 per cent according to the Communications Authority of Kenya. In Africa, there are 960 million mobile subscriptions according to a trend report by Jumia.

As of April 2018, Africa ranked second in the world in terms of mobile internet traffic as a percentage of total web traffic. At 63.88 per cent, Africa was above the global average of 51.2 per cent while North America, Oceania, Europe, and South America were below this average at 39.56 per cent, 38.97 per cent, 37.39 per cent, 33.51 per cent respectively. 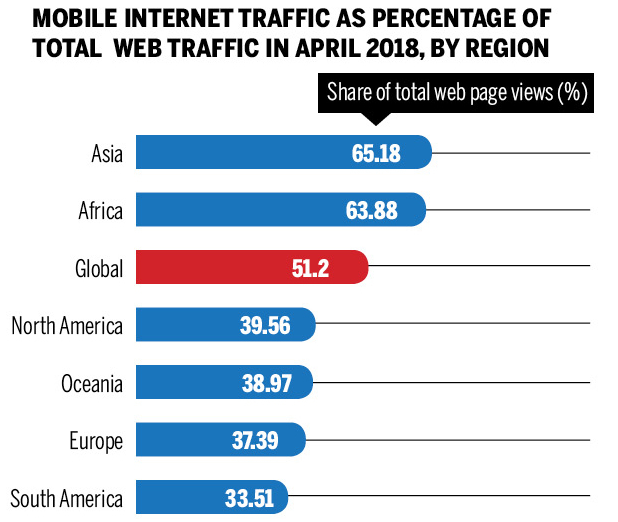 PGMs project to ensure sustainability for over 50 years: Sibanye

The value of transactions processed through NPS surged 9 percent in Q1While the volume of these transactions plunged 29 percentThe sharp decline...

RTGS accounted for 64.85% of the total transaction valueInternet-based transactions increased by 29% to ZW$216.69 billionAccelerated digital transformation will further heighten cashless...

Any cookies that may not be particularly necessary for the website to function and is used specifically to collect user personal data via analytics, ads, other embedded contents are termed as non-necessary cookies. It is mandatory to procure user consent prior to running these cookies on your website.